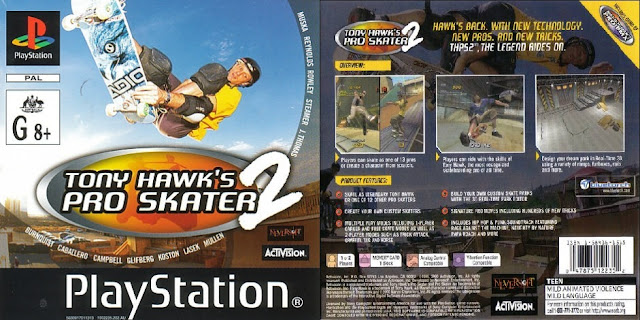 Series background:  First THPS was released one year earlier back in 1999. by Neversoft. At the turn off
the new millennium game was considered revolutionary at its genre. In 1999. Activision
signed contract with professional skateboarder Tony Hawk to star in Tony Hawk's
Pro Skater. Gameplay was open-ended, in which players  had to complete number  of
tasks with professional  skaters like finding secret tape  and doing high score. Game
was  well received by critics, scoring mostly high ratings. HD version of the game was
released July 18,2012. on Xbox 360,and later on Ps3 and PC.

Story:  Altrough there is no real story mode in THPS2, there is a Career mode in which player
progresses with one of many licensed pro skaters trough ten various levels. Completing
missions result in money rewards. With gained money players can purchase new levels,
boards, skills and tricks. Notice that THPS2 is the first game in the series that has Park
Creator and manual which enabled skaters to combine their tricks.


Gameplay:  THPS2 features multiple modes like: Single player, Free skate, Multiplayer, Career
and Create-a-park. There is also Mat Hoffman's pro bmx demo with one additional
level "Hoffman Factory".
Levels are open-ended of which seven are for missions and three are for competition.
Mission levels are designed for the players to complete numerous tasks in two minutes
like high scores, S.K.A.T.E. letters, secret tape and other level uniqe tasks. While
competition levels are made as real life competition, where judges rate your runs.
Controls are easy, more arcade than simulation style, and easy to learn.
Now we come to the best part of the THPS2, Multiplayer aprops 2 player  mode.
Through there was no online on PS1 still this mode stole many many sleepless nights
too millions kids all over the world. Trick attack, graffiti, horse, tag and free skate were
more than enough to keep you satisfied for a long, long time.


Graphics:  Game was made on The Apocalypse (1998) game engine that was redone for THPS2.
Through skate parks were desinged good,we gotta agree that this was not the best
that Playstation 1 could offer. Also notice that this engine was used for other Tony
Hawk games for Playstation 1 and for Spiderman 1 and 2.


Verdict:  Tony Hawk pro skater 2 is now considers true classic. There is no doubt that this game
is best in whole THPS serial. If you are interested in buying this game check out
Amazon or Ebay,game can be found by fair price around 7 up to 20 dollars.

Nostalgic gaming reviews and gameplays. Idea based on promoting old games which are not mainstream anymore.Reviews will be mostly PlayStation 1 games.